Valentine’s Day at the Sidewalk Cinema

Valentine’s sure is a divisive day. Love it or hate it, most don’t land between, plus it can clearly be circumstantial.

We wanted to do something for folks who fall on both sides of the Valentine’s coin and, either way, we definitely wanted to make it fun! What we’ve come up with is our official Kiss ‘Em or Diss ‘Em Valentine’s Day Spectacular event. 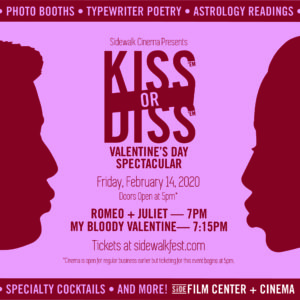 So… if you’re happily in love (even if only with Leo) we have Baz Luhrmann’s stylish 90’s-core ROMEO + JULIET in one cinema room and, for those heartbreakers or heartbroken, the ridiculously fun 80’s-era MY BLOODY VALENTINE will be screening across the hall. Of course, we’re not requiring proof of partnership or singletude, so catch the film of your choice, after all, what’s better than yelling at an ax-wielding mass murderer with your sweetheart or broken-heartedly basking in the glow of young Leo’s collagen?

Valentine’s Day seems like the perfect excuse to throw a party, so we’re going to really be pulling out all the red and pink stops with astrology readings, junior high school style carnation shout outs, photo ops, drink specials and more – as you know, we think film is best when it’s experiential. If you’re a total scrub we’ll have surprises in the lobby so bring a date, a friend or your shadow and hang out with us, we promise not to let them know you’re a cheapo.

But – if you’re NOT a cheapo and you’re up for pulling all the strings – check out our VIP package upgrade for any of the night’s ticket purchases! For an additional $20 to your ticket purchase, this upgrade comes with a drink ticket good for any beer, wine or valentine’s specialty cocktail (21+ only!), plus a custom iced cookie and a limited edition I ♥️ Sidewalk magnet.

A little more about our film selections:

MY BLOODY VALENTINE is an obvious choice, c’mon it’s Quentin Tarantino’s all-time favorite slasher. Who can resist a film that contains the Valentine’s poem, “Roses are Red Violets are Blue One is Dead and So Are You”. Released on February 11, 1981, according to the film’s producer, MY BLOODY VALENTINE was “cut to ribbons” in order to achieve an R-rating, such didn’t prevent it from becoming a massive 80’s home video rental favorite. We appreciate the slumber party vibes that MY BLOODY VALENTINE gives off and the film being shot on location in mines with limited lighting makes the production value, alone, worth a big-screen viewing. Also, Valentine is right there in the title!

We loved the idea of countering the 80’s slasher classic with a hyper 90’s style piece and what better than the basis for half the cinematic romances of all time? According to Luhrmann, he developed ROMEO + JULIET from the premise of making a film in a manner “in which Shakespeare might make a movie of one of his plays if he was a director. Shakespeare was a relentless entertainer and a user of incredible devices and theatrical tricks to ultimately create something of meaning.” We’re not sure about all that, but Luhrmann did manage to make a strange, overly stylish 90’s time capsule that is, at moments, dreamy and at others cringe-worthy in the best way. Fun fact: Key hair stylist Aldo Signoretti was kidnapped by gang members during production and held for $300 ransom which Baz Luhrmann paid – now that’s true love.

We wanted to be sure to cater to ALL audiences this Valentine’s Day, so later in the evening, we’re hosting a very special Valentine’s GAY Spectacular! 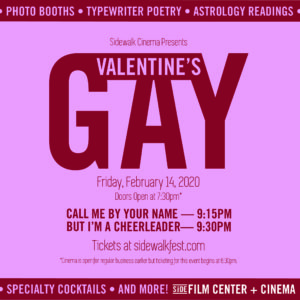 There are so few LGBTQ+ centric Valentine’s Day events! Join us Valentine’s night for screenings of the award-winning CALL ME BY YOUR NAME and cult classic BUT I’M A CHEERLEADER plus lots of fun surprises.

A few words about the films:
We know there’s an army of people out there who want to spend Valentines gazing upon the oh so precious Timothée Chalamet and such being balanced by the sheer weight of Armie Hammer makes is a no-brainer… so CALL ME BY YOUR NAME was an obvious choice. Plus it was the 2018 Oscar Best Picture nominee and winner of Best Adapted Screenplay, pretty impressive for mainstream Hollywood to acknowledge an Italian directed film about a May-December romance between two annoyingly attractive men. Join us for the seasonally appropriate opportunity to watch Armie Hammer awkwardly dance and not-so-awkwardly make out with Timmy Chalamet.
Had enough of Timothée Chalame’s hair? Not to worry, the ridiculous (in the best way) and fun BUT I’M A CHEERLEADER is just a few steps away. 1999 was a weird year and one that joined the forces of Natasha Lyonne, Michelle Williams, Mink Stole, Clea DuVall, RuPaul, and Cathy Moriarty (thank you, director, Jamie Babbit)! In case you didn’t know, BUT I’M A CHEERLEADER is about a high school cheerleader (played by Natasha Lyonne) whose parents send her to a conversion therapy camp to cure her lesbianism. I know, we had you at Michelle Williams.
Click Here to Purchase Tickets to Valentine’s Gay Spectacular
2:00 PM Armageddon Time 2:30 PM Tár
View Now Playing
2023 Independent Spirit Awards Nominees Screened at Sidewalk SIDEWALK’S ANNUAL BLACK FRIDAY SALE Jewish Film Week Programming from Dan Seigel
View All News