While we have several incredible films screening this holiday season at the Sidewalk Cinema, including GREMLINS and WONDER WOMAN 1984 (releasing on Christmas Day – we’re beyond excited), thanks to the pandemic we aren’t hosting a full holiday series line-up this season. Therefore, I thought I’d pass along a list of suggestions for holiday movie fare, especially for those who are quarantining to be with friends/fam or can’t make it out to the cinema this season. Perhaps some of these titles will end up in the Sidewalk 2021 holiday series (fingers crossed – they’ve been that way for a while).

Happy Holidays and here’s hoping for a much Happier New Year!

Quick note: Skipping over the most obvious choices like HOME ALONE, DIE HARD, CHRISTMAS VACATION, A CHRISTMAS STORY, Etc… they’re all great, but they get enough love. 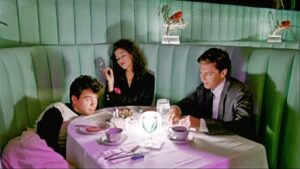 Filled with over-the-top Los Angeles holiday parties of all varieties, college-aged angst, rich people probs and lots of cocaine, LESS THAN ZERO is an 80s’ time capsule based on the novel by Bret Easton Ellis. Plus it features the sleaziest James Spader of all eras. 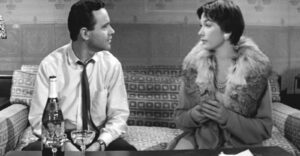 A Christmas Eve office party sets the narrative in motion and takes it through New Years’. The main premise: to climb the corporate ladder, Bud lets his managers switch off borrowing his apartment for their extramarital affairs. Unable to occupy his own apartment when in such use, his neighbors assume that Bud is the playboy. Antics and romance ensue. 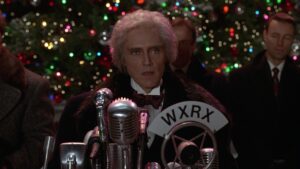 Superhero holiday! You know the one – the Michael Keaton Batman, white gold Michelle Pfeiffer Catwoman Batman. It’s the typically dark and gritty and city Batman, but with the magical glow of Christmas lights elevating the vibe. There’s a lot of Christmas in this one, sometimes it’s creepy Christmas, but as 2020 has really proven, the holidays can be like that. 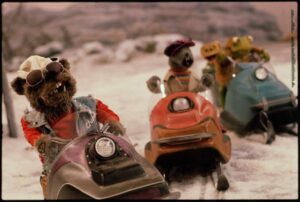 This is about as family-friendly as it gets. Clearly more of a made-for-TV-special than a true film, it’s still worthy enough to make the list. I love it for many reasons, but on top of that tally lands the Riverbottom Nightmare Band, the traveling fish in a tank, plus those sets! EMMET OTTER’S JUG-BAND CHRISTMAS is Jim Henson produced-directed with songs by Paul Williams. The original special featured an introduction, as well as some narration, by Kermit the Frog. However, in 2004 The Jim Henson Company sold the rights to the Muppets to The Walt Disney Company, and thanks to Disney doing what Disney does, Kermit’s scenes and narrations have been omitted. Some subsequent releases have restated much of the Kermit element, it’s fun to watch out for the different versions. Confession – even as a kid I really wanted Riverbottom Nightmare to win – fair is fair, they’re way better. 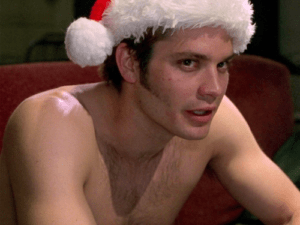 It doesn’t necessarily have to be good to make this list… This premise alone will do it: a 90s’ era drug deal goes bad at a Christmas Eve rave called Mary Christmas. A.Christmas.Eve.Rave. 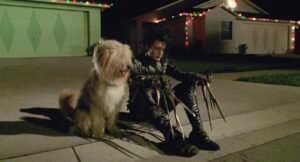 Another Tim Burton holiday moment. Not wholly a holiday film, but the last third of the movie really hits it out of the park with its most memorable visual moments – the cinematography basks in a snow-covered holiday glow, it’s a little like being inside a slightly eerie, but beautifully magical snow globe. 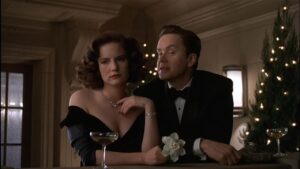 More fantastical holiday cinema, this brilliant Coen Brothers film takes place during the Christmas season leading up to New Year’s Eve and, of course, is all about the invention of a particular toy – the hula hoop. Fun casting fact: Tom Cruise was almost set to star as Norville Barnes, but the Coens insisted on Tim Robbins and Jennifer Jason Leigh won the role of Amy Archer over Ellen Barkin, Nicole Kidman, Winona Ryder, and Bridget Fonda. THE HUDSUCKER PROXY is the only PG-rated movie directed by the Coen Brothers. 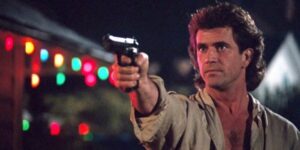 Action-heavy and, at times, dark af – the film opens with “Jingle Bell Rock” playing happily over credits and quickly moves to suicide, a cocaine bust that results in a full-on shoot out at a Christmas tree lot and widower cop, Martin, with a gun in his mouth ready to end it. Amazing premise – a suicidal cop who’s not afraid to die. At the time thought to only be worthy of action fodder, the suicide scene landed Mel Gibson the lead role in Franco Zeffirelli’s HAMLET (1990). 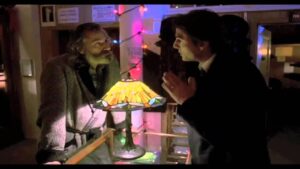 Leave it to Stanley Kubrick to bring us one of the darkest films on the list and that’s saying a lot. A Christmas party gone wrong leads to marital confessions and a wandering, contemplative late night on the town. The socially distanced tail end of 2020 is an interesting moment to revisit this one – framed by random human interactions and anonymous sexual encounters with the holidays as the backdrop, the context of the current era really doubles down on Kubrick’s powerful subtext. 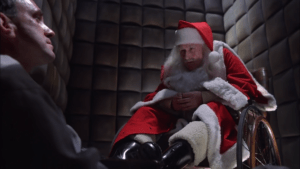 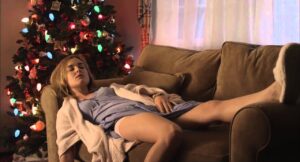 More cocaine Christmas… a holiday tragedy in suburban Virginia leads Suzanne on a mission of sorts to buy herself out of unhappiness and track down and befriend her newly deceased husband’s dancer-mistress, Fantasia. Starring Sidewalk alums Lydia Hyslop, Anna Margaret Hollyman, and Melodie Sisk, WHITE REINDEER delivers more Christmas spirit than you might think. One of the few holiday films to screen at the Sidewalk Film Festival, specifically Sidewalk 2013. 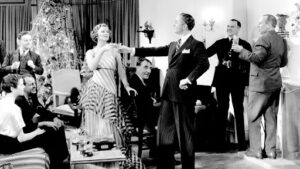 Another rarity – a Christmas murder mystery. Nick, a retired detective, and his wealthy wife, Nora, are visiting New York City from Los Angeles for the Christmas holidays. The festive celebration doesn’t last long as Nick is pulled back to duty to investigate a missing person case that quickly turns into a murder case. Not only is it a black and white comedy-murder caper set against the background of the holidays in 1930s New York, but it also contains lines such as Nora: “They say you were shot in the tabloids.” Nick: “They never got near my tabloids”. There’s also a cute dog.

We had you at YOU’VE GOT MAIL is an adaptation of THE SHOP AROUND THE CORNER. In line with such – with Christmas approaching, two gift shop employees can’t stand each other, but are totally smitten with their respective pen pals… you see where this is going. 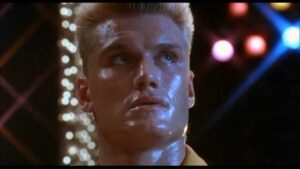 Another rare option – a Christmas-Sports movie with Boxing, anti-Russian propaganda, the Cold War, and Dolph Lundgren and Brigitte Nielsen…  2020 seems like the perfect year for this one. Written, directed by, and starring Sylvester Stallone, it also features a robot dressed as Santa Claus 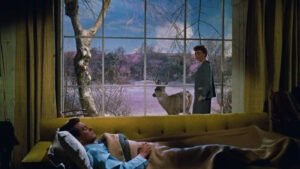 We screened this beautiful mf last December. More vibe than strict holiday fare, the Douglas Sirk masterwork ALL THAT HEAVEN ALLOWS is the story of a well-to-do widower, Cary Scott, who falls for the not-so-well-to-do hunk Ron Kirby. Cary’s college-age kids are brats and demand that the relationship ends. No surprise, the country club crowd isn’t too kind either. In addition to several beautifully captured holiday scenes, what better a season to question societal norms and acknowledge just what a pain in the ass family can be? Plus Technicolor has never looked so damn good, dozens of frames from the film also work just as well as paintings. ALL THAT HEAVEN ALLOWS perfectly captures the seasonal spirit and holiday landscape with all of the wonder, sadness, melodrama, and beauty that it brings. 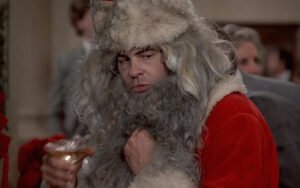 Do you ever feel like the 1 percent are gambling with your livelihood? In 1983, director John Landis made a comedy that suggests that it might not be entirely just paranoia. In TRADING PLACES, Dan Aykroyd’s uptight stockbroker and Eddie Murphy’s streetwise hustler swap lots in life one holiday season, thanks to manipulation by the wealthy Duke brothers. But when the two find their lives have been experimented upon, they team up with Jamie Lee Curtis’s free-spirited sex worker to bring the wealthy brothers down. Filled with quotable one-liners, memorable performances, and deeply silly screwball action, TRADING PLACES stands still as one of the most enjoyable “Saturday Night Live” star vehicles, cementing Murphy’s status as one of the most important stars of the 1980s. 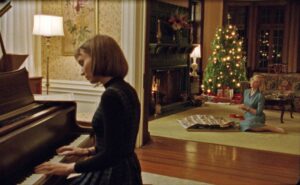 Words do no justice regarding this perfect film. it’s unforgettable, gorgeous, mesmerizing… – like the holidays, it’s at times fun and beautiful while also semi-melancholic and yet strangely hopeful. It also has an interesting drunken effect like the season can sometimes have and sort of stays with you for a while in a dreamy fashion. It’s truly dazzling. Plus we appreciate an LGBTQ holiday film! 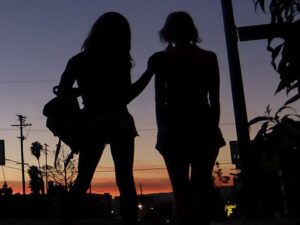 Speaking of LGBTQ holiday fare – celebrate the holidays with two magnetic transgender sex workers in Sean Baker’s marvelously warm and propulsive TANGERINE set on and around the streets of Hollywood one sunny Christmas eve. An uncontrollable force of nature, Sin-Dee gets out of jail and catches word that her boyfriend, Chester has been cheating on her. Despite her closest friend, Alexandra, warning her to relax, Sin-Dee goes on a Hollywood rampage to find the woman her boyfriend has been seeing. Baker shot the entire film on the iPhone 5S; each frame is soaked in the vivid colors of a LA sunset. The result is an intimate and raw but lovely story about friendship and grace in a subculture that, in the past, has rarely gotten such a humane portrayal. TANGERINE is an energy-packed powerhouse of a film. 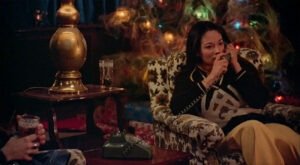 Christmas-sorority-house-stalking-killer stuff! This 1974 cult classic stars Margot Kidder and Olivia Hussey. Oh and, yes, it is directed by that Bob Clark, the same dude who directed A CHRISTMAS STORY (and PORKY’S). After all, we sometimes need a little break from all the Christmas time life-lesson yarn. 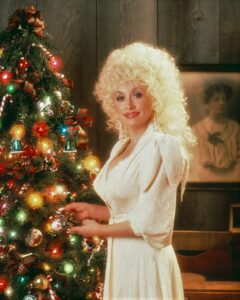 Dolly. Do we need to say more? No, we don’t. Dolly IS Christmas and she’s also saving all of us – celebrate her. A SMOKY MOUNTAIN CHRISTMAS

is directed by Henry Winkler aka The Fonz. 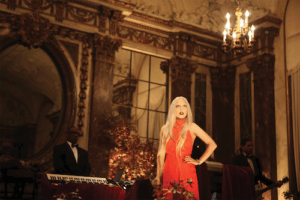 A VERY GAGA THANKSGIVING makes for incredible holiday background media wallpaper. It originally aired on November 24, 2011, and is lush and classy and seasonally appropriate as hell. Stefani Joanne Angelina Germanotta AKA Lady Gaga hangs out in various gorgeous settings with friends and family and discusses her holiday traditions and inspirations and, of course, performs some uniquely arranged versions of some of her hits, as well as holiday standards like “White Christmas” and not-so-standards like “Orange Colored Sky”. The set design is absolutely incredible and it’s, overall, a lovely production perfect for distracted holiday time viewing/listening.