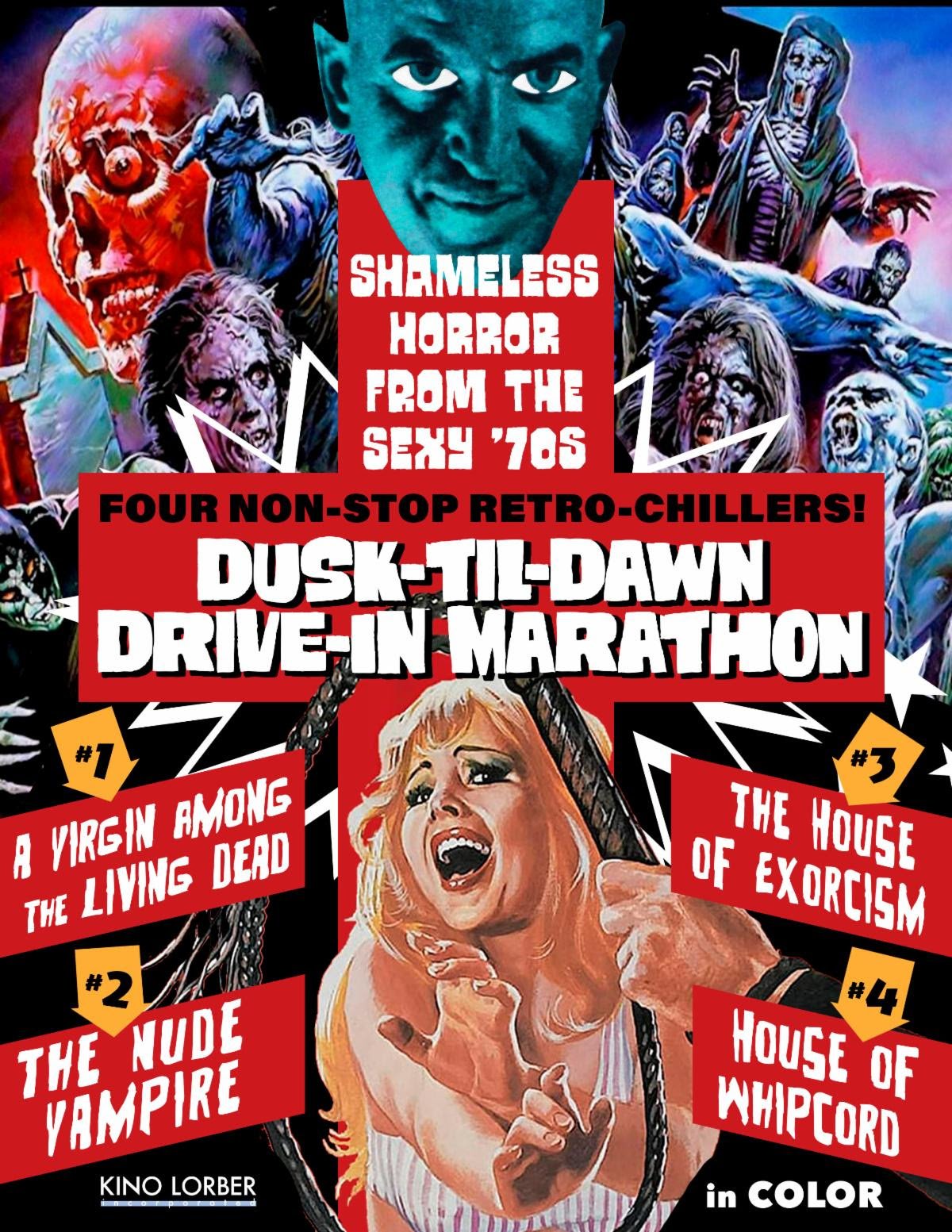 You can purchase a $20 series pass and get 30 days of access to watch all of these films, or you can rent them individually. These films have some mature content and are recommended for 18+ audiences only.

A VIRGIN AMONG THE LIVING DEAD

This disc includes two complete versions of the film: Franco’s original cut (CHRISTINA, PRINCESS OF EROTICISM) and the re-release version (A VIRGIN AMONG THE LIVING DEAD), which was expanded to incorporate zombie scenes directed by French horror auteur Jean Rollin (The Living Dead Girl). Also included is the softcore footage shot to create a third version of the film.

Wealthy industrialist Georges Radamante (Maurice Lemaitre) has dreams of immortality. Not through his own achievements, but by finding a way to share the biochemistry of the mute, orphaned vampire woman (Catherine Cartier) who has been raised by hooded needle-stickers in isolation, deprived of exposure to human faces. Radamante’s son Pierre (Olivier Martin, Rollin’s real-life brother) innocently complicates matters while trying to infiltrate his father’s private club. It is love at first sight and Pierre determines to liberate his beloved, a goal which attracts the companionship of other vampires, who plan a torch-carrying siege of Radamante’s palatial compound.

Rollin’s first color film and his first collaboration with director of photography Jean-Jacques Renon, THE NUDE VAMPIRE (La Vampire nue) is a curiously science fiction-tinged story in the then-fashionable style of Jean-Claude Forrest (Barbarella) and Metal hurlant artists Jean “Moebius” Giraud and Philippe Druillet, who was in fact recruited to design the film’s poster.

LISA AND THE DEVIL

Regarded as Mario Bava’s most personal and unconventional film, LISA AND THE DEVIL (Lisa e il diavolo) is a diabolical thriller flavored with the dreadful imagery and tormenting logic of an endless nightmare. Elke Sommer stars as a tourist in Spain who, upon seeing the image of a bald, grinning devil in an ancient fresco, wanders away from her group and finds herself drawn into a confounding labyrinth of mystery — lured ever deeper by a mysterious figure (Telly Savalas) who may in fact be the fresco’s Satan made flesh.

Year: 1974
Running Time: 102 minutes
Country: U.K.
Language: English
In HOUSE OF WHIPCORD, fashion model Ann-Marie (Penny Irving) is lured into a private reform school where she is punished for her sexually liberated behavior by a zealous warden (Barbara Markham). The warden and her doddering husband established this house of horrors to stifle the sexual revolution, imprisoning and killing those who offended their moral propriety. Only Ann-Marie’s liberated roommate (Ann Michelle) can help her escape. This politically provocative women-in-prison movie was made in reaction to the rise of The Nationwide Festival of Light, a conservative group established to protest sex and violence in the British media.
CLICK HERE TO RENT (Sidewalk gets a portion of the proceeds!)