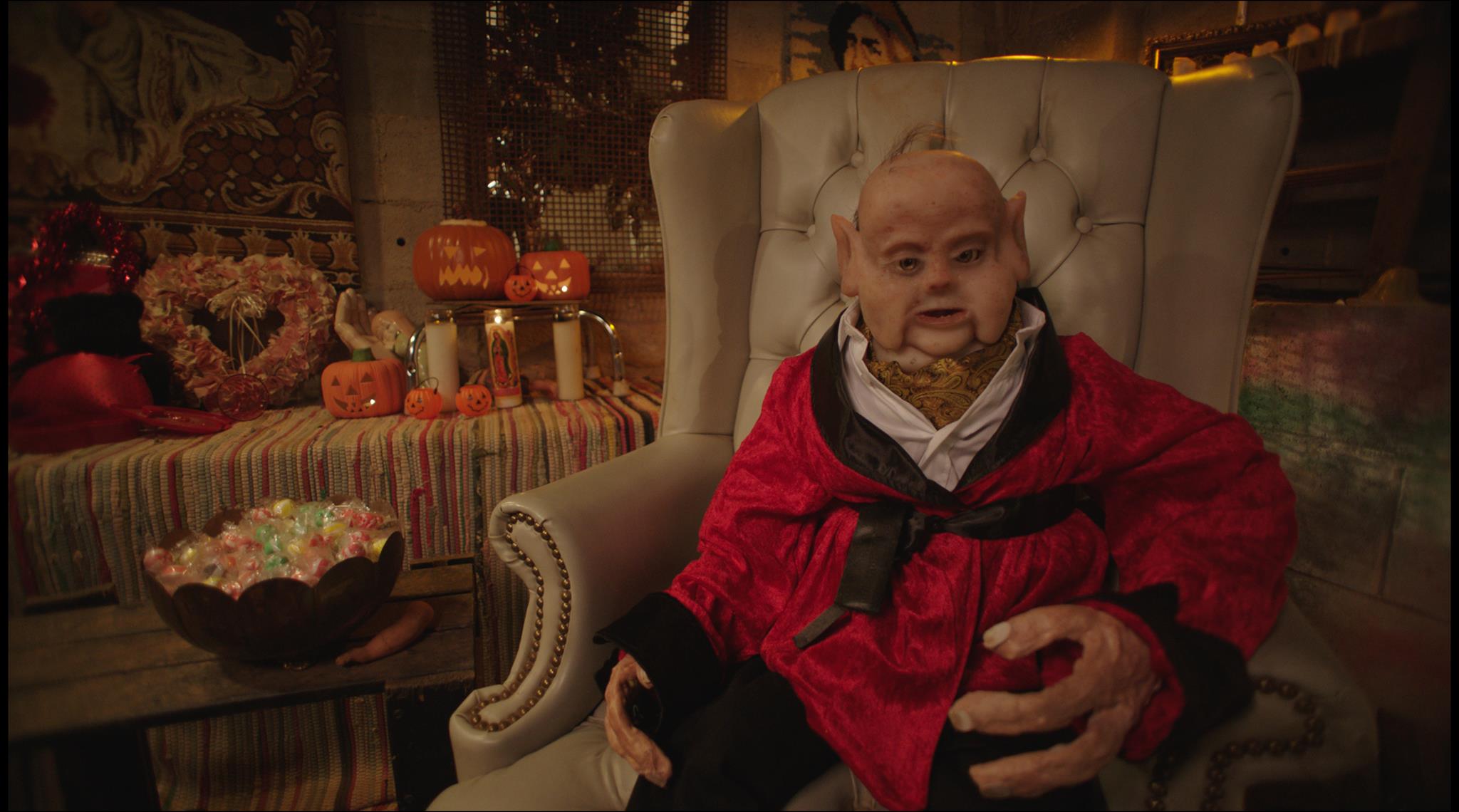 Please keep in mind Carrigan’s is a 21+ venue, and these shorts are perfectly spooky (and not for the faint of heart!) We’ll have a discussion with Dan Schoenbrun following the film. As always, tickets are $8 ahead of time, $10 at the door, and $5 for students anytime.

Taking viewers on a chaotic journey through the liminal space of the Halloween season, The Eyeslicer Halloween Special feels like an acid trip down the Halloween aisle at Party City. The Special features work by over a dozen boundary-pushing American filmmakers (and includes shorts that have played at places like Sundance, SXSW, TIFF, and True/False). The Special is created by Dan Schoenbrun and Vanessa McDonnell (collective:unconscious, Chained for Life), executive produced by the radical artist collective Meow Wolf, and hosted by nine amateur Elvira impersonators we found on CraigsList.

From an X-rated Halloween party hookup to a coming of age story set on the eve of Ted Bundy’s execution; from a documentary about pumpkin carving and misogyny to a supercut about the gendered dangers of the bathtub; from a cursed stand-up comedy set to a woman ( Carrie Coon) trapped inside a Red Lobster commercial; from a John Carpenter homage (featuring a cameo by Carpenter himself) to a sequel to The Eyeslicer’s now infamous Gwilliam, The Eyeslicer Halloween Special is an experience like no other – a deranged, proudly transgressive anthology carving out a bold new space in the Midnight movie genre.

The creators of The Eyeslicer will travel the country with the Special this Fall, judging costume contests, giving out candy (no razorblades), and hosting filmmaker after-parties at select screenings. Limited edition VHS copies of the Special will be available at the merch table, as will as a new tour-only Eyeslicer zine. In 2019, the Eyeslicer Halloween Special will be released digitally as part of The Eyeslicer’s second season, but the only way to see it this Halloween season is on the big screen.

“Growing up, we’d spend all summer looking forward to the new Treehouse of Horror, to spending October watching countless VHS horror movies we were definitely too young to see,” said Schoenbrun and McDonnell in a statement. “Our new Halloween special is guaranteed to put you in that same spirit, but it’s more than just a nostalgia trip. We can’t wait to spend the Fall driving around this horror-movie of a country sharing our mindfuck of a new special with audiences over eighteen years old.”

The Special comes on the heels of The Eyeslicer’s ten-episode first season, which featured work from 50+ visionary filmmakers including David Lowery (A Ghost Story), Ari Aster (Hereditary), Amy Seimetz (Starz’s The Girlfriend Experience), Shaka King (Newlyweeds), Yen Tan (1985), and many more. Last year, the first season of the show embarked on a 20+ city ‘smell-o-vision’ roadshow, had its world-premiere at the Tribeca Film Festival and its international premiere at Rotterdam, and was called “one of the craziest TV shows you’ll ever see” by Indiewire.

“Fry Day” (Dir. Laura Moss) – On the night of Ted Bundy’s execution, a young girl embarks on a dangerous adventure.

“Steve’s Kinkoes” (Dir. Emma Debany) – Steve travels to a 24-hour copy shop to make missing posters for his dead cat. Will he ever leave?

“Nothing a Little Soap and Water Can’t Fix” (Dir. Jennifer Proctor) – a frenetic supercut exploring the role of bathtubs throughout film and horror movie history.

“All the Witches” (Dir. Nellie Kluz) – this observational doc takes us onto the set of a new horror movie.

“Underbelly Up” (Dir. Joshua Yates) – a ghost reflects on the 2015 South Carolina Flood.

“Gwilliam’s Tips for Turning Tricks Into Treats” (Dir. Brian Lonano) – everyone’s favorite trashcan goblin is back with some tips guaranteed to result in a fun and safe Halloween night.

“The Puppet Man” (Dir. Jacqueline Castel) – a dreamy tribute to the slasher films of John Carpenter

Plus! An original Halloween song, animated credits, and video Halloween cards from some of our closest collaborators.